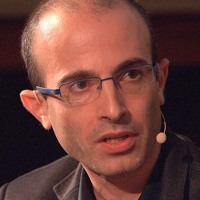 ​• Sapiens: A Brief History of Humankind

Yuval Noah Harari is an Israeli professor of history and the author of the international bestseller Sapiens: A Brief History of Humankind. He teaches at the Department of History at the Hebrew University of Jerusalem.

Harari specializes in "World History and macro-historical processes". His research focuses on macro-historical questions such as: What is the relation between history and biology? What is the essential difference between Homo sapiens and other animals? Is there justice in history? Does history have a direction? Did people become happier as history unfolded?


Yuval Noah Harari on the Rise of Homo Deus

at the Emmanuel Centre, London, on 5th September 2016.

“Studying history aims to loosen the grip of the past… It will not tell us what to choose, but at least it gives us more options.” – Yuval Noah Harari

Yuval Noah Harari is the star historian who shot to fame with his international bestseller 'Sapiens: A Brief History of Humankind'. In that book Harari explained how human values have been continually shifting since our earliest beginnings: once we placed gods at the centre of the universe; then came the Enlightenment, and from then on human feelings have been the authority from which we derive meaning and values. Now, using his trademark blend of science, history, philosophy and every discipline in between, Harari argues in his new book 'Homo Deus: A Brief History of Tomorrow', our values may be about to shift again – away from humans, as we transfer our faith to the almighty power of data and the algorithm.

In conversation with Kamal Ahmed, the BBC’s economics editor, Harari examined the political and economic revolutions that look set to transform society, as technology continues its exponential advance. What will happen when artificial intelligence takes over most of the jobs that people do? Will our liberal values of equality and universal human rights survive the creation of a massive new class of individuals who are economically useless? And when Google and Facebook know our political preferences better than we do ourselves, will democratic elections become redundant?

As the 21st century progresses, not only our society and economy but our bodies and minds could be revolutionised by new technologies such as genetic engineering, nanotechnology and brain-computer interfaces. After a few countries master the enhancement of bodies and brains, will they conquer the planet while the rest of humankind is driven to extinction?

Yuval Noah Harari examines our future in his new book "In Homo Deus" with his trademark blend of science, history, philosophy and every discipline in between.

Lecture : Brief History of Tomorrow   via The RSA

A Brief History of Tomorrow with bestselling author Yuval Harari. What is the next stage of human evolution? How will we protect this fragile planet and humankind itself from our own destructive powers?

Sapiens: A Brief History of Humankind was a wide-ranging exploration of humankind’s history. In his new work Homo Deus, Yuval Noah Harari envisions our future: a not-too-distant world in which we face a new set of challenges and possibilities.

With his trademark blend of science, history, philosophy and every discipline in between, Harari will investigate the projects, dreams and nightmares that will shape the twenty-first century – from overcoming death to creating artificial life.